StreetFocus will automatically identify where desired improvements to streets could be funded by developers, improving transport and quality of life.

We're delighted to have been awarded a grant of £10,000 towards StreetFocus, from @SouthCambs Zero Carbon Communities grant!

We're delighted to have been awarded a grant of £10,000 towards StreetFocus, from @SouthCambs Zero Carbon Communities grant!

Our new StreetFocus website, launching fully in a few weeks, will enable everyone to:

Since last summer, we’ve been working hard to create the new StreetFocus website. We’re pleased to say that it’s now available, at www.streetfocus.uk.

The site is a ‘beta’ – ready to use, but may have some bugs! 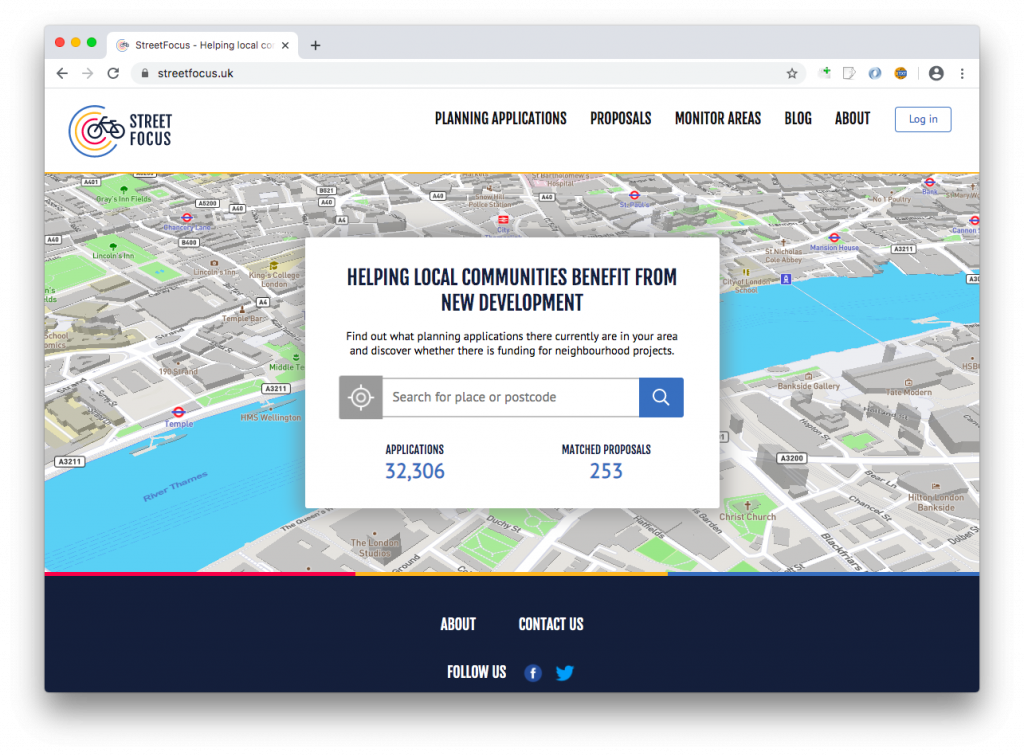 With the site, we concentrated on two key aims, which arose from our research with decision-makers, organisations, officials, and local people:

Work to create the new site has been funded by Innovate UK, as well as a grant from South Cambridgeshire District Council. We’ve also been working with Leeds University, who are using the data in a new project looking at transport access to new developments.

Data for the site comes from our project partner, PlanIt – who have worked hard to make the data more reliable, to make it filterable, and to make the map display fast!

As the site is now available for people to try, we’re at the stage of seeking feedback. We’ll be contacting Local Authorities, community groups, and interest groups around the UK to get their thoughts on how the site will work for them, and what they’d like us to work on next.

Let us know your thoughts! 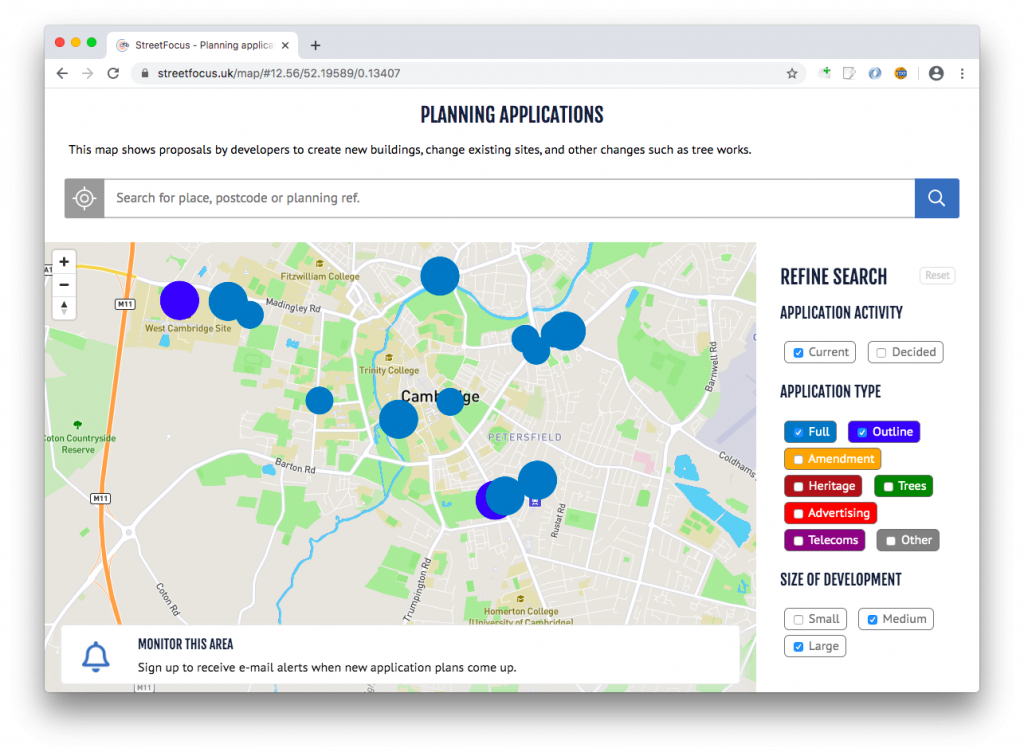 StreetFocus is a new project being created by CycleStreets, a social enterprise in Cambridge, and which is funded by the Geospatial Commission / Innovate UK. [Press release.] Martin Lucas-Smith, one of the developers of CycleStreets, who are running the project, talks about how we can use planning application data to bring benefits to local communities.

Throughout the UK, public street infrastructure does not yet always meet the standards of the best European cities. Changes have been piecemeal, rather than based on a vision of beautiful and practical places to be enjoyed. At the same time, people sometimes lack transport choices, so taking the opportunity to allocate space to public transport, walking and cycling, when streets are redesigned means that levels of traffic can be reduced and people can live healthier lives.

These benefits can often be delivered when new developments are being planned. Communities are keen to have more influence in decision-making to ensure this. But sadly, new developments sometimes cause disputes, rather than being seen as opportunities to fulfil long-desired improvements to an area.

StreetFocus aims to enable Local Authorities and communities to achieve improvements to their streets by automatically identifying where desired improvements could be funded by developers, to mutual benefit.

Time and time again, such opportunities for street improvements are lost because local government is sometimes rather disconnected. Moreover, there is no way for local communities to register future desires in a systematic way. A planning officer considering a proposed new commercial estate is unlikely to be aware that transport groups have been pushing for a safe cycleway on the adjacent road for instance. Likewise, a Highway Authority may be unaware of ideas for a new route from an existing estate to the nearby park, which would increase physical activity and reduce crime.

StreetFocus will work by combining information from PlanIt, a national aggregator of local authority planning application data, with Cyclescape, a site to enabling local people to crowdsource long-desired changes to street infrastructure.

PlanIt has, for the first time, created a national, open database of planning applications, enabling people to see proposed changes near them easily on a map. CycleStreets and PlanIt are working together as partners on the project.

“Around the UK, there are so many opportunities to improve local streets to make them more attractive places to live and which give people transport choice. We were excited when the Geospatial Commission announced funding for innovative projects like StreetFocus. By matching the desires of local people for changes to their streets with the new developments that could fund them, happier and healthier places to live, travel, work and shop can be created. The planning system is ripe for innovation, and there is much potential for the government’s open data agenda to be applied to it.”

We will be working to create StreetFocus over the coming nine months, and will be talking to Local Authorities, community groups, and decision-makers around the country to research how particular elements of the planning system could be improved, to the benefit of all.